skip to main | skip to sidebar

Someone To Take My Shit 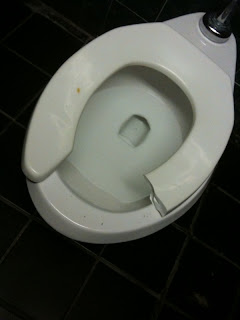 We were about seventy miles outside of Atlanta when I felt my stomach tap out in the third.In a five round scheduled match with Shit Man.It was one of those horrible shits that makes you hate every song you hear on the radio.Hate life.Hate everything about yourself including your inability to shit on yourself.Gritting your teeth like you were administering your own stitches after falling through sixty foot pines like a Stallone dummy in Rambo.The type of shit you impregnate yourself with at Wendy's.We were under an hour to go and that little nugget was gnawing it's way out of my anus demanding it be born now...in the van.Keeping with the whole pregnant vibe I would imagine breaking wind would be the equivalent to a woman's water breaking.The sharp pains barely relieved by the short wonderful bursts of shit air for each to enjoy.The driver flipping through the stations like a seizure  overtaking an idiot ignoring my requests to pull over,like The Bandit and guess who's Smokey.....my asshole.As if matters couldn't get any worse Yak Ballz asks the driver to turn up the radio so he can enjoy....

I can see the Atlanta skyline and all I can think of is the way I will place the toilet paper delicately on the bowl.The preparation.The sweet ritual of shielding my cheeks from bacteria and disease as if it makes any difference.Will it be a nice horse shoe lid or a tradish circular one?The White Stripes screeching from the van's speakers on the verge of blowing like my puckering asshole.Meg White's drums(really Jack White's)pound like my stomach in a rear naked choke at the hands of Shit Man tapping out -TAP TAP TAP-TATAP-

Who is that angrily rapping on my intestines chamber door?None other than a shit raven I presume.How I long for it to fly from my hole and fly around the room one upping the patron before me breaking the only non piss covered seat in the house.A sad broken bowl.I realize someone had to shit far worse than I did.I used the ladies room because it's usually cleaner.It's funny how the ladies room can  be far more horrendous and vile than the men's room.What's worse a shit splattered lid or blood sprayed?This one was definitely worse.

I can't remember much of the evening because I started drinking at 6 PM.I do recall however seeing a lot of trans-gender guys dressed like women hanging out at the show that was in the upstairs room from mine and it was definitely more packed than our show.I think we were in North Carolina or maybe that was tomorrow(as in today)but the fuck if I know what city for certain.The only thing that is certain is that the wheels have fallen off this shit truck long long ago.I stayed in a nice hotel but I have to be honest with you.The south is really tough for me to handle,not because I'm not into so much grease intake but,because I was a fan of the Union and double negatives.I ate a terrible dinner.It was the type of place that might call you a faggot for ordering a salad.As if a finely filleted cock meat might be sliced and spread across a bed of greens.As I imagine the sharp pains on the tip of my penis shoving it into a deli slicer.I begin to fall into a heavy sleep from the lack of rest and early binge drinking.

I woke up stabbing my own thigh to keep awake. I was becoming some crazed switchblade maniac far too quickly impaling people on my fist then dragging their lifeless corpses into an alleyway.I had killed 9 or 10 people but I couldn't really be sure.I was squeezing out a hemorrhoid inducing loaf one minute the next squeezing my ass to hold in one from soiling my child-like colored American Apparel briefs.I couldn't tell if I was awake or if this was really happening.Either way it was the most exciting feeling I had ever felt.The tip of the roller coaster right as it falls and leaves your tummy at the top over and over somehow skipping the entire ride rapidly starting again and again like a clipped flapping filmstrip or a wasp with one of its wings pulled off.Something I would imagine only God could do had he gotten into video editing.Nothing had gotten my heart racing like this unsure feeling in my guts.One thing was for sure I had to shit again.No bathroom in sight so I shat in a bucket next to a dumpster nearest a bald headed woman who's throat I had apparently slashed from ear to ear across her mouth following a thick dotted line made with a dying sharpie like a nice face lift treasure map for a deranged amateur surgeon to follow.I think I beat her face in with a chunk of cinder block because her eye was hurting my feelings and reminding me of what my mother instilled in her little constipated boy who was so far gone now.That and an old Edgar Allan Poe story.I heard someone coming so i jumped up and hit my head on the bottom of a fire escape ladder but somehow only felt pain in my groin.

When i opened my eyes I was sitting on a broken toilet seat.I guess I had dozed off holding my pearl handled switchy which was very strange because I could almost hear the blade gasp in sadness that it was all a dream.I don't recall playing in this southern city and I am now certain it is in fact Atlanta.I think the heat was fucking with my mind and my imagination went out for a run because my fat head grows bored of itself.I was brought back by a sharp thrill from my scrotum being pinched by this heart broken toilet seat.

I think I start to lose it most when I am in the van for those long rides like seven hours or more,stopping an emptying a band of crazed lunatics into a truck stop.Texting until your battery goes dead.In and out of sleep.Waking up with an erection then trying to piss your hard on away and being "that guy" pissing all over the seat and part of the stall wall.Thank Christ I had gotten that shit out of me because I might actually start putting that stiletto to use perhaps,a self administered colostomy exit.

I returned to the back stage after shaking hands with a few fans and realized I hadn't washed my grabbers.I recall this being before sound check.Sorry about that and,I am sorry if I appeared rude taking pictures with you by the dumpsters in the back of the club.Smoking cigarettes like I was a heroin addict pulling my  exhausted lungs to get that last taste of brown down to the filter like the cig was laced.Smelling shit on my fingers with disgust and leaving trails of microscopic fecal matter on the adoring supporters shoulders as I posed for soul stealing.If I didn't need to hold onto my existence,I might cut off each appendage in order of least important to useless skin tags. But I wouldn't get very far had I started off with the hands either way that smell was destroying my neat freak fancied spirit and I had to escape.

I walked into an empty dressing room where I began to remember the terrible performance i had given in bright short flashes like the strobe I bury my face into every night I pretend to perform.The self deprecation.The humility.The humiliation of me.The terrors that live in my skull that make it very public that they await to dehumanize and destroy me.The cheering of the crowd as I throw my dying shell around like an armadillo baking on the side of the road as winged predators peck at it's soft underbelly.An acted out mirroring of a petulant retarded child attempting a theatrical display of actual professionalism  I make believe I posses for entertainment.I climb into the van to rejoin the last few souls that actually know me and can force the jowls on my face to slinky up to expose my bashful teeth like a girl flashing her panties in a long black dress.A smile.No matter how angry or sullen i am.Happy for a moment with my intestines empty I am still.Then sad as my bladder immediately informs me that,I now have to piss.

Posted by chrispalko at 1:35 PM